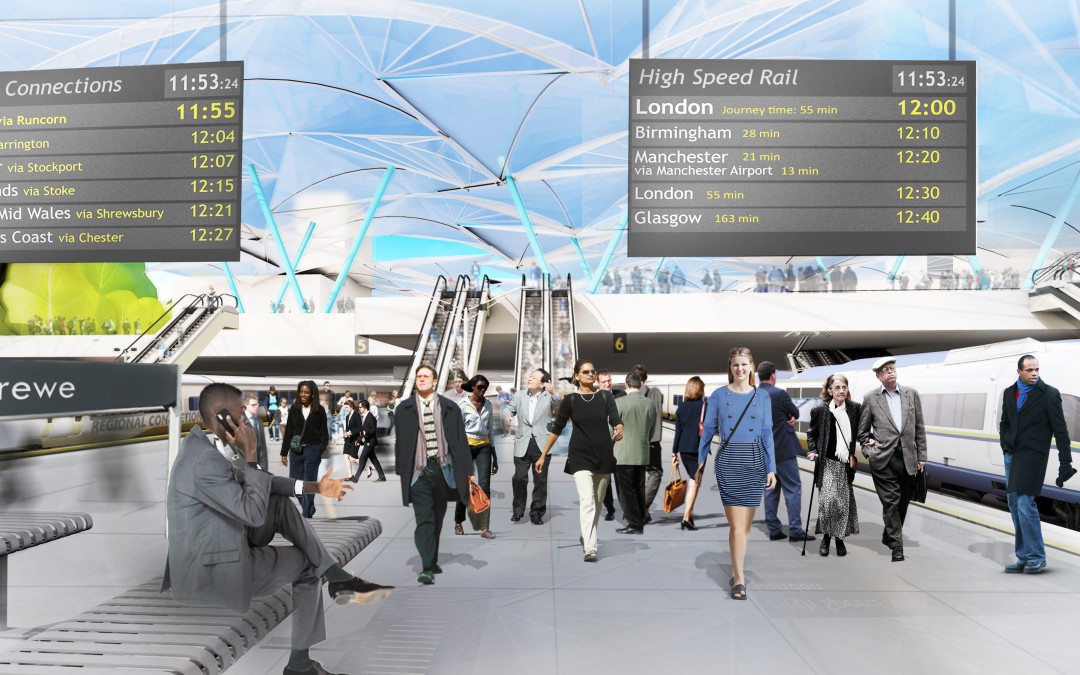 The Crewe story as we know it began in 1837. That’s when a strategic piece of Cheshire countryside became integral to the great railway expansion of the mid-nineteenth century. Nearly 180 years later, another significant iron road project, HS2, could be another game changer for the town.

At the start of the Victorian era, multiple tracks were laid, engineers planned, factories rose up, workers and support services flooded into Crewe during several decades of unprecedented growth. Originally only a small village in the 1830s, by 1877, when Queen Victoria became Empress of India, Crewe was home to around 40,000 people. In 2016, the town’s population is believed to be around 85,000.

What the advent of the proposed HS2 high-speed rail project will mean for the town is anyone’s guess. And that’s the thing; many of the numbers, boasts, projections and hopes are based on guess work. Cllr Michael Jones, former leader of Cheshire East Council, suggested in December 2015 that upwards of 120,000 jobs could be created, and that £10bn might be injected into the wider region’s economy – each year! I think we’d all take that.

In late February, MMU Cheshire Campus staged a debate aimed at discussing how HS2 could impact upon Crewe, its people and the university. Students and members of the public gathered to listen and pose questions to a panel of five guests, plus chairman for the evening, Ellis Michaels from MMU. 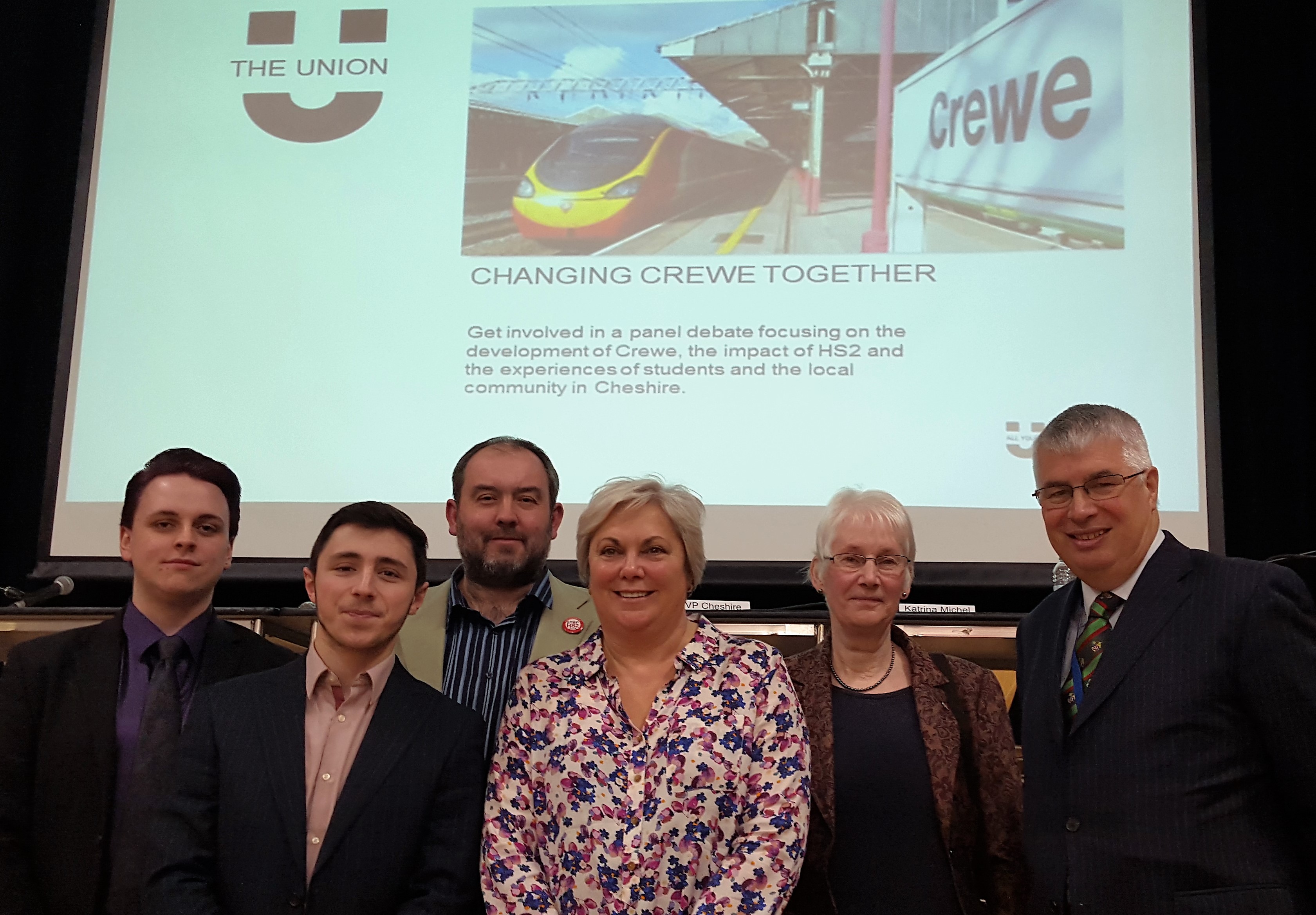 CHANGING CREWE TOGETHER was the banner, and we soon tucked into some cracking exchanges that sought to present the pros and cons of what the proposed high-speed line could do for Crewe, and the South Cheshire area.

Tony Davison kicked things off. His assertion that HS2 is a “once in a generation opportunity to regenerate Crewe” was well received. However, suggesting that “the hub MUST be centred on the existing station” was soon challenged. 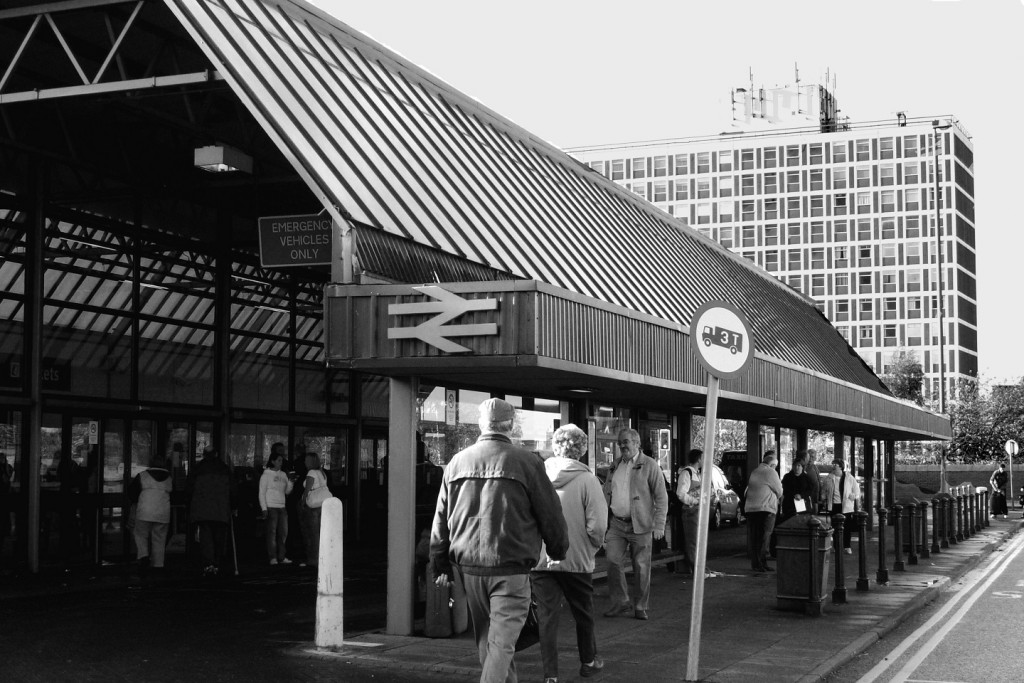 Now I’d love to see a concourse similar to Manchester Piccadilly, or even the fabulous redevelopment of Birmingham New Street. However, Crewe already has issues that need to be addressed. The train station is nearly a mile from the “town centre”, and confusion with the Nantwich Road shopping mile and the retail park off Earle Street leave many visitors unsure exactly where the “centre” is. Moreover, parking and traffic around the existing station hub is far from ideal. Do we really want to increase the road volume?

Joe Rukin went further. He maintained that building on the existing location has not been included in the costings. All plans currently suggest a new-build several hundred metres down the tracks, somewhere around Basford. The financial element of the whole HS2 project doesn’t sit well with Joe, who highlighted that “the estimated cost has escalated from between £32bn to £50bn, to somewhere between £80bn and £100bn”. Scary numbers!

I’ve heard numerous people talk about Basford, because it offers scope, few planning constraints, less disruption to existing rail lines and also connects better with the M6 motorway. A chap from one of the Crewe rail companies was also present, and he made it clear (privately, later) that building on the existing station footprint is a crazy notion. Moving down the tracks would, he suggested, open up many other “opportunities” to improve how existing freight is routed, leading to better passenger services elsewhere. Time will tell…

What impressed me from the opening minutes of the debate was the input from MMU students. There were some fabulous ideas, much hope and a desire to work closer with the core town. However, this was countered by some who admitted that they very rarely use the town centre, its pubs or businesses. Vaughan Hughes said that many of his fellow students “thought that Crewe was boring” and that “Hanley, Chester and Manchester” were the only decent options for shopping or a good night out.

The majority of attendees either scoffed or raised eyebrows. Tony Davison pitched in, regularly “batting for Crewe” as he put it. Katrina Michel also noted that hotel occupancy in the area has started to rise since the government revealed Crewe’s probable part in the HS2 infrastructure.

Surely that’s positive news? Whether extra tourists have visited the town, or business folk have made trips to the area looking at land, development opportunities and what the workforce/student organisations could offer them remains to be seen. But numbers are up. Katrina Michel also revealed that a project with Crewe Town Council is ongoing to “raise the town’s profile” to travel agents, conference organisers and businesses looking to expand. More people “need to know where Crewe is” she claimed.

The whole commuter town argument also featured. Crewe could become a convenient hop-off for passengers travelling between London, Birmingham and Manchester. How would that benefit the town? Tony Davison answered quickly, suggesting any growth in the housing stock would be good news, whether the people living in new developments worked in the town or not. They, and their families, would spend leisure time and shop in and around the area. Crewe would benefit. 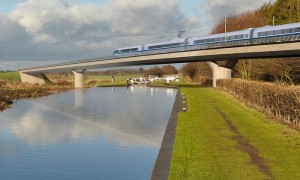 There was, however, a note of caution. Joe Rukin pointed out that “if good rail links equalled economic prosperity then Crewe would already be one of the most prosperous towns in the country.” Katrina Michel also asked those present to be wary, using Ebbsfleet (a town in Kent) as an example of what can happen to main line promises. HS1 sweeps through Ebbsfleet, and many see the station as a convenient park-and-ride. House prices have risen considerably over the last decade. The economic expansion, however, has not gone hand-in-hand with the construction of a swanky new station. Finally, Vaughan Hughes asked whether HS2 would “make Crewe a destination, or just a fast link to London?”

Personally, I think somewhere between the two. Crewe and Cheshire East councils must step up, as must local and regional businesses if the area is to attract numbers to not only pass through but get off and stay for a reason.

But what is the alternative? Many anti-HS2 campaigners suggest that monies should be used to improve existing rail and road routes. Ros Todhunter made it clear that we “must update the existing infrastructure, and not simply create a fast track to London” that will benefit only a few. She recalled a recent journey from Northwich to Crewe that took over forty-five minutes. That’s not good. The massive expenditure planned for HS2 would, she claimed, be much better spent creating better connections between the smaller Cheshire towns and Crewe. This caused something of a commotion on the top table. Joe Rukin backed her, but Tony Davison issued a stark warning. “If there is no HS2 investment, the money will disappear. It will not be invested in local transport projects. Not one penny,” he insisted.

As a geologist, Ros Todhunter also highlighted concerns about the environment. With HS2 on the planning table, a number of other initiatives have, she said, been put on hold. “An underground gas storage project near Northwich has been mothballed before it started,” she told the audience. “Such schemes create many jobs and are vital for the region.”

The evening was well managed by MMU’s Ellis Michaels, and speakers and questions from the floor were kept brief. There was much to discuss. And next up was how MMU’s students could benefit from a more expansive regional rail hub centred on Crewe. 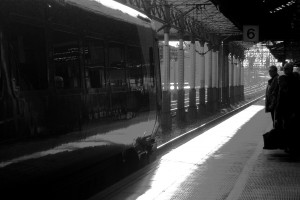 Not surprisingly, the issue of ticket prices cropped up. The new HS2 services will be fast, quick and possibly luxurious, but at what cost? There were no definitive answers from the panel. Prices will be higher, surely, but positives were highlighted. Tony Davison suggested that “West Coast Main Line and regional services will benefit from extra capacity”, while one student believed that “with more flexibility, MMU students would be able to benefit from off-peak fares” that would surely be part of any new services. Again, we’ll have to wait for pricing details, but any peak service is likely to cost a few quid!

On the employment front, there is optimism for the future. With rail and engineering firms set for ongoing growth, there will be increased demand for technical staff, willing apprentices and more graduates. Service companies will demand other disciplines. There will be a reason to live and work in and around Crewe after degrees have been completed. Katrina Michel hoped that the arrival of new engineering centres and other businesses would “foster a spirit of entrepreneurship amongst student circles” now and in forthcoming years. It appears that is already happening, as an Enterprise Society was established at the university earlier this year. From little acorns…

For the above to blossom MMU will need to consider which courses it offers carefully. It must service the growing demand now and in five, ten and fifteen years’ time. It must also work in partnership with South Cheshire College and the forthcoming University Technical College. There must be a common vision. Crewe must lead the way and provide the skills that will encourage Inward Investment in Cheshire.

Hopefully this summary gives Cheshire people, workers, day-trippers and leisure lovers a flavour of what might be. There’s certainly potential, but seeing some cast-iron plans, more accurate costings and some real dates that people can work towards is the next big step forward for the HS2 project. 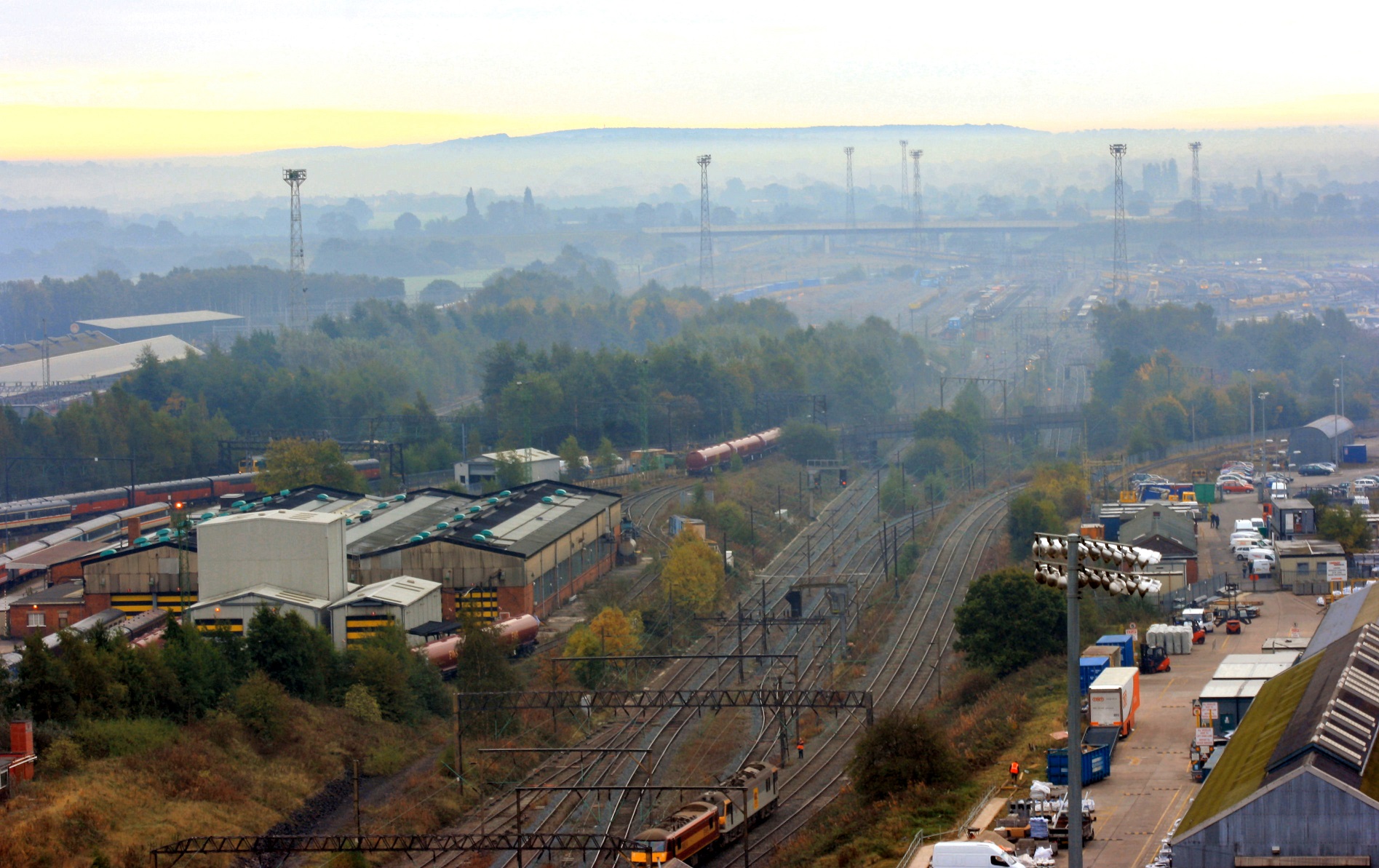 There’s a certain ring to Made in Crewe, isn’t there? It shouts proud railway heritage, engineering, skilled men and women, Rolls-Royce and, more recently, the world-famous Bentley Motors range with its all-conquering SUV currently leading the luxury marque’s charge. And there’s so much more, from Mornflake Oats to Whitby Morrison, Chevron Cars to Mrs Darlington Jams.

Crewe’s challenge is to build upon past and present glories, and harness everything that HS2 will bring to the fast-growing Cheshire town. I came away from the MMU debate with real hope. There are obstacles, and plenty of them, but the town’s workforce is both determined and flexible. The next chapter in Crewe’s evolving story is only just beginning…